The end. That’s how this begins.

We buried the ashes of Beauregard Lee Bercaw, M.D. on August 22. The event was more than a final act — it was a homecoming

My father grew up on a farm in Palmyra, Virginia with his three older brothers. Beau 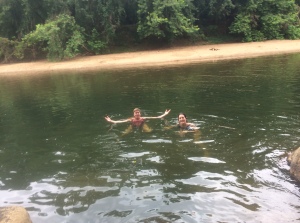 was a surprise child arriving seven years after Peter. The age difference meant that he was at home with his mother long after the others went off to find their way in their world. Beau loved the farm, especially the Rivanna River that marked its southern boundary, as well as his mama.

In my youth, we spent every summer at that farm, in that river, and with my grandmother and often my cousins and aunts and uncles. There, I saw a different side of my dad from the hard-working neurologist. I saw the boy.

We canoed from the farm to the bridge in Columbia, or from Palmyra to the farm. We hiked in search of relics from the Civil War. We found old spoons in the ashes of a burned down house. We sat on the swing seat in the backyard and talked about life. We had hay fights and took naps in the barn. We got poison ivy and bee stings. When I was older, we put six packs of beers in tubes and floated wherever the water took us. We ate so much pie that our guts nearly burst.

These were among the best days of my life. Until death started bringing me back. 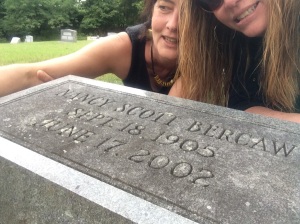 Over the last 15 years, I have stood in the cemetery of Lyles Baptist Church to bury my Uncle David, my grandmother, my Uncle Woodson, and now my father. Somewhere along the way, I also mourned the loss of the farm.

On August 22, as we said our final goodbyes to Beau, we had the surprise opportunity
to say hello to some old friends. Reverend Tom LeVines and his wife Shirley, who also lived on the Bercaw Property for a while, showed up to pay their respects. They were good friends to my grandmother, uncles and father. My grandmother ended up selling them 10 acres of our land, where Tom and Shirley built a geodesic dome for a home — with a huge drawing of the animated Inspector Clouseau on the outside!

After our short memorial and long lunch, the LeVines called the newest owners of the farm and asked if I could come put a handful of Beau’s ashes in the river. They said yes, so off I went (with the LeVines, as well as David and my nephew Chris and his girlfriend Courtney) to our old stomping grounds.

We filled a tiny canoe named Garuda with Beau’s ashes and set it down the river. Funny thing about this trip — I didn’t swim. I just didn’t feel like it. Instead, I sat on the banks and watched the water pass.  I watched Beau’s tiny canoe float away, then I walked away.

Back at the LeVines’d dome, they mentioned that they had built another house on 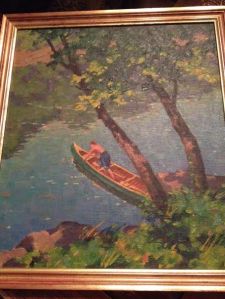 their property and it was for sale. I couldn’t believe my ears! Here it was! My chance to buy back a portion of the Bercaw land! I could spend summers there with my family! Life in Palmyra wasn’t over! Indeed, it could begin again! Yes! Yes! Yes!

I thought about it all week.

At first, I was sure this was a gift from the past. But then it began to feel like a burden for the future. Do I want to drive 12 hours to our vacation home? Once there, do I want to sit in that house, which isn’t on the river, and remember what was? Do I want to hope and wait for the cousins to visit every few years? Do I want to walk around my land in Palmyra with ghosts?