That’s the only word I can think to describe our first day in Oman. Maybe someone else can come up with a better one.

All I know is that I got to live this:

Oliver, the manager of this villa guest house — which features a mermaid painting on the wall — encouraged us to go to the Oman Dive 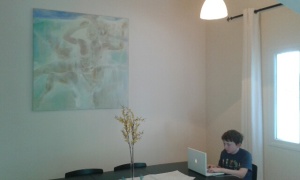 Center beach to enjoy the Arabian Sea/Indian Ocean. Oliver called Muhammad, the driver who picked us up at the airport, to take us. Turned out Muhammad was not available, but he said his cousin Said was.

Said showed up promptly at 11 a.m. with a big smile. I was grateful he could come at all because it was the last day of Eid al-Adha and a big feast would be on his table at some point.

“I’m glad you were available on this special day,” I said. “Are you ready for the celebration?”

Said took his right finger and made a knife motion across his neck.

You can probably imagine what went through my mind. He was demonstrating that he slit a neck. Or was he?

Said took out his iPhone and started to show me some pictures. In one, he seems to be in a chair and people with scissors are behind him.

“Oh!” I say delightfully. “YOU GOT YOUR HAIR CUT.”

I look at the back of his head under his Omani hat — the Kumma — and, yup, short hair under there. Mystery solved. He got his hair cut. He did not slit a neck! Or did he?

Said showed me a few more pictures. I asked if I could hold his phone since my eyes ain’t what they used to be. It all came into focus. Said had spent the morning slaughtering a cow for the feast. That’s who neck was slit. The sacrifice’s neck.

And thusly we embark on the day.

Said and I gab some more. He tells me he likes Tom Cruise and Rambo. I tell him America is nothing like either of those characters. I silently rage at the Hollywood machine.

Onward. Said points out lovely things in Muscat, like the Grand Mosque and, of course the grand views. Muscat is mountainous. And those mountains go right down into the sea. Breathtaking. Like nothing I have e

ver seen. Brand new to me and D.

Out of the blue, Said says, “Mikee moose.”

D and I are perplexed. What is Said saying? He says it again and again. Finally, he points to the back of our seat. Yup. Mickey Mouse is embroidered on the seat cover. I hadn’t noticed it with all the talk of morning hair cuts/sacrifices.

A half hour later, we arrive at the Dive Center. And my mind is officially blown. The Dive Center is both a place to rent SCUBA equipment and to hang out. For a very modest sum, you have access to a pool, restaurant and beach lounge chairs — not to mention the most spectacular view ever. My Samsung doesn’t do it justice. The water is bluer, the sand is whiter. The contrast is the beauty. I couldn’t wait to add my pink skin to the equation.

David decides that we should eat first. I think staring at the sea probably is the best way to start. David orders a hamburger. I get some rice.

When our meal is delivered, we immediately realize the meat between David’s bread is not beef. What is it? Friends, it’s camel meat. David refuses to eat, but I decide to try it. DELICIOUS. I eat the whole thing and David polishes off my rice.
Sipping our sodas, I hear a voice. 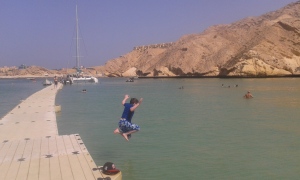 Is someone calling me? Okay, I’m dreaming all of this, and now David is waking me up. It’s the only thing that makes sense.

I turn to see where the real voice is coming from because it is real and I recognize it. The voice belongs to Simi, a new friend I made a few weeks back at the British Club. She and her husband Chris (a private school principal) live in Al-Ayn, another Emirate state known as a green oasis, but had been visiting Abu Dhabi on that occasion to see our mutual friends Adam and Abby. Adam, who works for Cartoon Network, became good pals with Allan last Spring. They are super group of people, and have lived all around the world.

Simi and Chris have three kids. I simply adore their family, especially her. She is hilarious and smart and courageous. She’s British of Indian decent. During our first conservation, she told me about introducing her British boyfriend (Chris) to her family in London. Upon seeing him in the living room, Simi’s grandmother announced that there was a white man in the house and asked her family if he was there to fix something. Little did she know that Chris would become part of the family.

I put my soda down on the Dive Center restaurant table, and stand up to hug and kiss Simi. She tells me Adam and Abby and their two girls are here too, but are out SCUBA diving. They’ve all rented huts on the beach for the weekend.

After an hour of snorkeling, David and I spent four hours with Simi and her kids. She rented a kayak and the kids, including David, think it’s the most wonderful thing in world to tip it and right it over and over again. An Omani boy came over to play too. Simi named him “Tipper” because he loves tipping the boat so very much.

The water was shallow and we’re all waist deep. Perfect for kayak tipping and girl gabbing with Simi, who is like most of my dear friends in the world — we are on the same page about everything. We laugh about the stupidest things, are perplexed by the same things.

Said picked us up promptly at 4 p.m. We were exhausted. David announced that it was the best day ever. (He’s said that a lot since coming to the Middle East, and it pleases me to no end.) I fear that my back is sunburned as I completely forgot to douse it in 50+ SPF. If that’s the price to pay for a perfect day, I’ll pay it.

We arrive back at the guest house and Said says he has something for us. What is it? 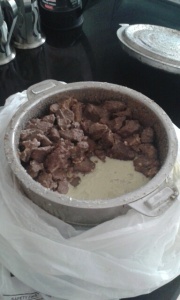 Dinner. He’s giving us a share of the sacrifice of his family’s feast. It’s still warm in a pan wrapped in plastic and in a LuLu Supermarket shopping bag.

The meat is beyond delicious, cooked in Omani spices — the likes of which I have never tasted.

A day beyond amazing. The very reason I travel of out of bounds.