Taxi cabs tend to be the tipping point for me in foreign countries. The factor that determines a good stay vs. a challenging one. Be it known, however, that this tipping point constantly shifts. Good cab experience = good day and good host country. Bad cab = bad day and…

In Seoul, circa 1988, the anti-American sentiment SEEMED to be embodied in cab drivers. They often refused

to pick us up and often passed us up altogether. One cold rainy night, a driver took me to the wrong location–and it SEEMED to be on purpose. I was tired of being hated in South Korea and I decided to retaliate. I stuck my thumbnail into the cab drivers face. Then, I jumped out and ran.

The only thing my stupid violent act accomplished was to ensure that the Korean cab driver would hate Americans forever and a day. I fueled (or possible lit) his fire with my ire. It was quite likely that he didn’t understand where I wanted to go. It was highly unlikely that he’d take me to the wrong place on purpose.

My perception of the situation created a worse one.

After several decades of reflection, I’ve come to realize that what you think is happening may not be what is really happening. ESPECIALLY when you are out of your element, your country, your comfort zone. Jeez, I was so off-base in Seoul that I didn’t even realize a couple of friends of mine were PYSCHO KILLERS. There I

was attacking a poor innocent cab driver, and meanwhile defending my murderous pals against the police. Ugh.

Cut to August 2014, and my arrival in Abu Dhabi. Again the cabs present a problem. The MAJORITY of drivers are pleasant, but their driving skills scare the hell out of me. I’ve already blogged ad nauseam about the issue. I’m a nervous passenger in the best scenarios, so MAYBE the situation is not as bad as I perceive it.

But TODAY, I lost it. My composure. My compassion. My cool.

And it wasn’t in a cab. Rather, my brain exploded in the taxi queue at the Al Wahda mall.

First of all, today’s temps were high again. Crazy hot. It may or may not have been 115 in the sun and on the concrete. Even the trolley boy, who helps get grocerie 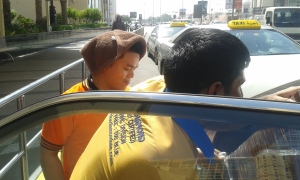 s and packages into the boot of cabs, was wearing a washcloth on his head to soak up his sweat.

Typically, in extreme heat, the queue stays under the tent-like cover at the taxi stand. But for SOME reason, the queue went rogue and in another direction altogether. People clung to shady spots even though they were neglecting the man-made shade of the cover. I tried hard not to judge this self-preservation tactic.

Until IT happened. Some people saw the gaps in the queue (created by shade huggers) as a chance to jump the line. Okay, so that may not sound

so terrible, but sweat was flowing — not dripping — down my back, legs, arms, head. Plus it’s a holiday weekend and cabs were not flowing.

I was sighing, and fidgety. The shade gang was creating the queue-jumping problem.  Finally, I left my spot and went up the chief shady guy and said, “CAN YOU PLEASE MOVE FORWARD??? PEOPLE DON’T REALIZE THERE IS A QUEUE! EITHER WE CAN STAND IN THE SHADE OR WE CAN GET CABS!”

He quickly moved ahead into the sun. Others followed suit.

As I walked back to my place in the line–being held by an apoplectic chap–everyone SEEMED to be whispering about my boldness or craziness. I imagined they were saying (and this is my own residual Korea shit) how this big blonde white lady was out of line (ironically). People don’t tend to rock the boat here. But at that moment I needed to tip the boat over.

Finally, I got a cab. And guess what? The driver and I lamented the traffic together. We laughed about the stupid queue situation together. We spent an hour in the holiday road jam together. We were allies despite our cult 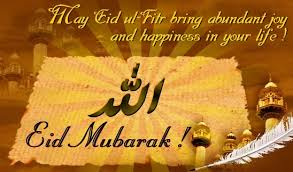 ural divides. He told me he was from Peshawar, Pakistan. He didn’t even wince when I said I was American.

When my time with today’s driver came to an end, I gave him a rather large gratuity. I said, “Eid Mubarak,” which is a wish for blessings on the Eid al-Adha holiday–a celebration commencing the Hajj to Mecca.

Blessing to all those who journey.  May we be pilgrims of peace.