Yesterday, I entered the salt waters of Abu Dhabi. You may know this place as the Persian Gulf, but here it’s called the Arab Gulf. And, man oh man, is it salty. It’s also warm, very warm. Like a hot tub that’s not so hot.

David and I swam out to the floating docks and stared out at the skyline of the city. He complained, after a while, that the salt hurt his eyes and skin. When I got out of the water, tears came to my eyes. Not from pain but from joy.

There is nothing I love more than testing out new waters.

We’ve also dived into David’s new school. Today at orientation we learned much about AISA, including the fact that there are 72 countries represented in the K-12 classroom. David’s teacher hails from the great country of Iowa. 😉

The work/school week here is Sunday-Thursday with Friday and Saturday serving as the weekend. I hope I don’t forget to send David to school on Sundays.

Moving to Abu Dhabi has been giant leap of faith. We don’t know what each day will bring, or take. For now, we’re finding our way with cabs, the new currency, and the gulf waters.

This place is home to faith, of many kinds. At the mall today (yup, we went again), I noticed a Filipino woman make the sign of the cross before she ate her lunch. Meanwhile, Emirati filed in and out of the prayer room on the first floor. 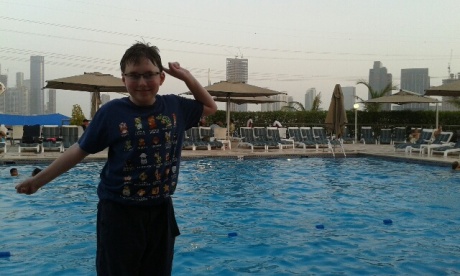 I have faith in us.

When David and I were on the floating docks, I issued him a challenge. Typically he just does a pencil jump a foot from the edge. With some encouragement, and many tries, I finally got him to run and leap as far as he could–about four or five feet from the edge.

“How was that?” I asked when he surfaced.

NSB in the UAE

P.S. I’m watching the World Cup of Swimming, which is live from Dubai, right now. A Jamaican swimmer just beat the two top American women in the 100-meter breaststroke. Talk about a leap!