My father was born May 30, 1938 in Manila, where his father was sent by the IRS to try to get Gen. Douglas MacArthur to pay his taxes. Oddly or ironically or serendipitously (will someone tell me the right word?), Beau was sent to the Philippines to be a surgeon during the Vietnam War–and then I was born in that country as well. We were the only two Filipino Bercaws in the history of the world.

Now I am the only one.

We used to celebrate Beau’s birthday on Memorial Day because us kids would be off from school and we could spend the long weekend together. I had planned to have a big party in honor of Beau today in our beautiful backyard, but I’m just not up to it. I still can’t believe he’s gone 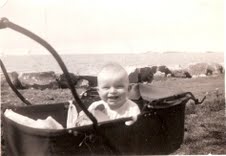 . I would rather cry my eyes out than fry burgers.

Memorial Day will forever be bittersweet. I will remember my father’s life, and the lives he saved during the Vietnam War. Yet the holiday is a remembrance of those lost to war—and, ultimately, we lost Beau in his battle with Alzheimer’s.