Excerpted from “Brain in a Jar” about my trip to the Philippines 23 years ago.

“Welcome home!” says the Filipino immigration agent when he notices the place of birth in my passport. After a year of saving every penny in frozen Korea, I arrive in steamy Manila in the spring of 1989.

I’ll learn something about my father in this country, I am sure of it.

After dropping my bags at a guesthouse, I walk the length of the city—from Malacañan Palace, where Imelda Marcos’ shoe collection is preserved, to the sex shops in the Makati Pasay Road bar district. I buy a Coke in a McDonald’s, which is guarded by a soldier with a machine gun. I nap on a bench in the huge Rizal Park.

The next day, I take a bus to Baguio through the winding mountains. I throw up out the window from motion sickness like some of the other Filipino passengers. I arrive in the cooler hill station, as the British once called it, and lie down on the grass. I look up at the sky.

I try to see if I can spot animal shapes in the cloud puffs.

When I feel better, I walk down Asin Road, where the famed Baguio furniture makers congregate to sell their wares. This is where my father had an enormous desk constructed out of the indigenous kamagong wood. The desk was made to my father’s specifications. It accommodated his great height and held his piles of journals, files, paperwork, reflex hammers and prescription pads. And his father’s brain in a jar at the center of it all.

I find a very old Filipino craftsman and watch him carve with a small, sharp knife.

“Yes?” He gets up from his cross-legged position. He’s about half my size. “Are you looking for something special?”

“Yes, I came from Hapao that year. Before Baguio, I carved wood in the forest.” 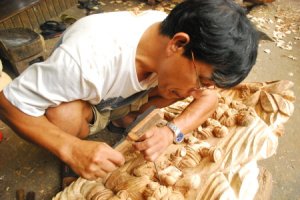 “Do you remember seeing a man who looked like me? A huge, giant man with a big grin and wild blue eyes? An America man who believed he was a Filipino, too?”

I sound like I am tracking down a fairy tale.

The old man shakes his head. “I don’t remember like I used to. And I have seen too many people.”

“He had a huge desk made somewhere around here. The biggest desk I have ever seen.”

“No,” he says again, and sits back down to continue his work. He seems disappointed that I’m not going to buy anything. Then he looks up at me again.

“Who are you looking for?”

“Where is he buried?”

“Because this is where he was born, and I was too.”

The carver thinks while he plays with the chair he is working on.

“Go see Dominican Hill. Great view of Baguio up there.”

I give him a handful of pesos and head back to town. I ask a cab driver to take me to the top of the hill.

“It’s closed,” protests the driver. “No more tourists can go there. Not safe. Headless ghosts.”

“Diplomat Hotel is there, used to be seminary. Japanese turned it into a POW camp. Beheaded nuns and priests inside. Killed babies by the fountain. Very bad place.”

“Will you drive me past it?” I plead.

“For double money. I play radio loud so we don’t hear the screams.”

“Filipinos hear the screams of the dead coming from there.”

“When was the hotel in operation?”

“Filipino faith healer bought it in 1973. People came from Europe to be cured in the hotel. He died three years ago. Hotel closed.”

I’m certain my father would have come to see this place—before it was a hotel—while visiting Baguio back around the time I was born.

“Take me as close as you can,” I say. “By the way, I was born in the Philippines. My father was, too. Maybe I can hear the screams.”

“You are a big, white, beautiful Filipina,” he says, and chuckles, before hitting the gas.

“You should see my dad!”

“What does he do?” the driver asks.

The driver slows as we approach the old Diplomat Hotel. He turns the radio volume up as high as it will go. It’s crackly but I can make out the lyrics.

Philippines! My country, my homeland

Gold and flowers in heart abound

Blessings on her fate did love bestow

How her charms too kind and tender

Drove the stranger to enslave her

Land of mine! In fetters kept,

You suffered as we wept.

“There!” the driver yelps and points toward the old gates.

The driver peels out and heads back down the hill. He drops me at a little guesthouse run by his cousin, where I get a room for $5.

I crawl into my tiny bed and fall asleep. When I wake up, a cup of coffee and a slice of toast are waiting on my nightstand.

“I love you Philippines,” I say out loud. “You’re a whole country of Bercaws afraid for your heads.”