According to the Buddha, the dead are in limbo for 49 days before being reincarnated. Those left behind are in an intermediate state as well. These in-between spaces, for the living and the dead, are called the “bardo.” The possibility for enlightenment is heightened during this suspension.

Here’s how one Tibetan scholar describes the bardo chasm: 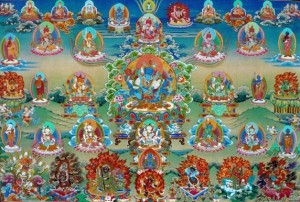 It is an interval, a hiatus, a gap. It can act as a boundary that divides and separates, marking the end of one thing and the beginning of another; but it can also be a link between the two—it can serve as a bridge or a meeting place that brings together and unites. It is a cross­ing, a stepping-stone, a transition. It is a crossroads where one must choose which path to take, and it is a no-man’s-land belonging to neither one side nor the other. It is a highlight or peak point of experi­ence and at the same time a situation of extreme tension caught between two opposites. It is an open space filled with an atmosphere of suspen­sion and uncertainty, neither this nor that. In such a state, one may feel confused and frightened, or one may feel surprisingly liberated and open to new possibilities where anything might happen.

Even before I found about the bardo (which was Tuesday),  I was writing about it. But I could study Tibetan Buddhism for 200 years and not come closer to understanding it. All I know–actually, all I feel—is that my father and I are in parallel places right now. Transitioning from one way of being to another. We’re still connected albeit separated by life and death. 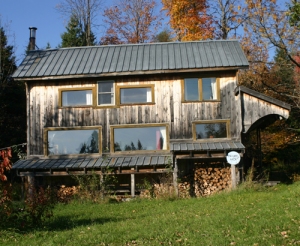 Beau very closely studied these concepts as put forth by many faiths: Hinduism, Judaism, Islam, Buddhism and Christianity. I believe he was well prepared to face the trials of purgatory in any way, shape or form.

But I may need a little help during my bardo, so I’ve signed up for two days at the beautiful Sky Meadow retreat in rural Vermont. I’ll stay in a cabin near a pond. I’ll pet a newborn lamb. I’ll eat veggies and sleep late.  I might, forgive me Buddha, sneak a bottle of wine and a Snickers bar into the sanctuary in honor of Beau. Recalcitrance being a signature Bercaw trait; and, the bardo being the ultimate tension of opposites.

Most  importantly, though, I’ll leave space in my head for grief and hope to wrestle and reconcile.  I will find a bridge and sit in its center. I will be still—yet still with Beau as we move away from each other.