Thirty years ago, I left my post as a Peace Corps Volunteer at Munzatsi Secondary School in Maragoli, Kenya. I didn’t think I’d ever look back, let alone go back. As a young American woman and new teacher in rural Africa, I struggled with being far, far away from what I knew about life. I was fresh off a big career as a swimmer, and trying hard to re-invent myself on dry land. Maragoli was a rough place to start.

I wasn’t the best teacher or person back then (nor am I now) but I sure did love my school and its stunning setting in the rocky hills above Lake Victoria. The best thing I ever did for Munzatsi was to ask my father and stepmother for help in building a library. They dove into the project and, even after I was long gone, the library came to be. My father was named an honorary chief of the Maragoli tribe for his dedication to the school and the creation of Bercaw Library.

The second best thing I did at Munzatsi was to play basketball with the boys and girls’ teams every day on the dirt court outside my house. On weekends, we’d hop into the back of a huge open-air lorry, as if we were cargo, and make our way to tournaments. If we won, I bought everyone a soda and we’d sing at the top of our lungs as the lorry bounced around the back dirt roads of Vihiga District. That must have been a crazy sight for pedestrians: thirty Africans packed into a huge truck bed, with one very pink American lady (in an ill-fitting skirt and filthy sneakers) smack dab in the middle of the glee. I was very happy on those days.

But on most other days, I was very depressed. The poverty in the Western part of Kenya was intense. I wondered why I taught English instead of working on sanitation and public health. I was a fish out of water in a place where the people needed clean water. I also realized that I needed a lot more help than anyone in the area. They knew how to live on their land; I didn’t. I wanted a Peace Corps to come save me — from myself.

In the three decades since leaving Munzatsi School, I’ve often reminisced about the place and the people. I wondered if any students from the school had left the village for college or careers? In 2015, while I was in Abu Dhabi, I got an answer. I met a number of Maragoli people who’d come to the UAE to work in the service industry. They’d mastered English, the language of international business, and were doing very well indeed — sending money back to their families, and paying school fees for their children.

Back in Vermont in 2016,  on the eve of my 51st birthday, I entertained the idea of going back to Kenya and Munzatsi School. Two days of internet searches produced affordable airfare from Boston to Nairobi in March. Obviously, I booked them! And then I wrote the school an actual letter to say I was coming back on March 10, 2017 at 11 a.m.

The new headmaster, David Atwera, wrote a letter back and said, “this is your home.” And this my reunion was in motion. With the generous donations of pals near and far, I raised $1000 for new books for Bercaw library. Headmaster David and I communicated via email (since that is now an option) to get everything in order for the big day.

And what a day it was. Right up there with the best ones of my life — winning big swim races, randomly bumping into a long-lost dear friend in Bangkok, becoming a mother on a snowy Sunday in rural Virginia!

Headmaster Atwera picked us up at our Kisumu hotel the morning of March 10 in Munzatsi’s very own van! Son David sat in the front seat with Hopkins, a boy his age from the school, alongside the driver. Meanwhile Allan and I sat in the back with the headmaster. The route up the hills was as beautiful as I remembered it, but with much more traffic and local shops along the way. Poverty still pervasive, but infrastructure and industry aplenty. 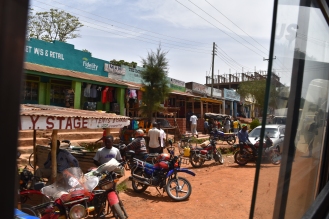 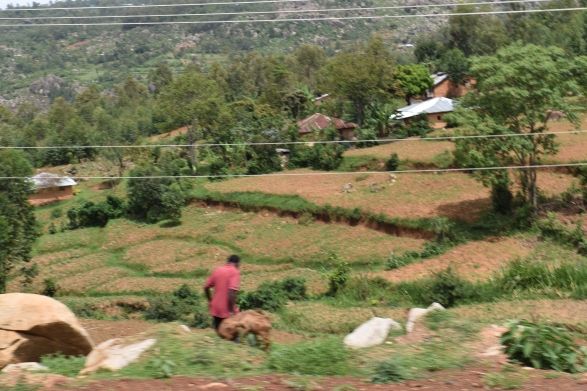 We were met at Munzatsi’s gates by esteemed members of the school and the district’s educational community with whom we enjoyed tea and conversation. Afterward, we toured the grounds, and I had the great pleasure of putting the book I wrote about my father, “Brain in a Jar,” into the Library he built. With our entourage, I showed son David and Allan the classrooms, the basketball court, my old house and even my old bathroom (which was merely a hole in the ground, but has been replaced with a nicer facility and hand sinks). 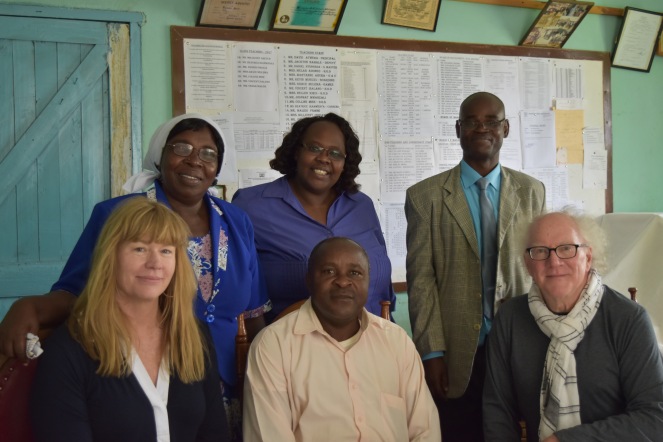 In the midst of our tour, a motorcycle came rushing onto the scene carrying none other than Jacton Kasavuli, the headmaster for whom I worked back in 1986-1987 — the man with whom my father built the library. We hugged for a long time. Pointing to his heart, he said, “Your father is always here.” We held hands, the way I used to with my father, and continued the walkabout. My father firmly in my heart, too. 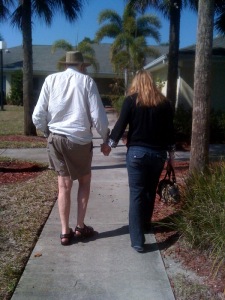 Headmaster David Atwera, with the help of his good colleagues, had a few surprised in store for us. First up, he’d arranged for the delivery of three trees — one for me, David and Allan — that we were to plant on the school grounds. The holes were waiting and all we had to do, one by one, was place them. At one point, our photographer Anne (thank you Anne) told Allan to look up, and he said, “I’m working here!” Laugher ensued, and David and I were required to say the same the line when it was our turn. 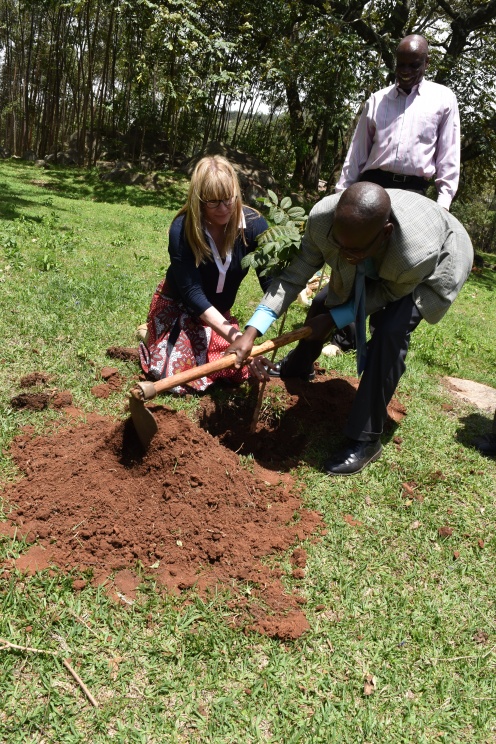 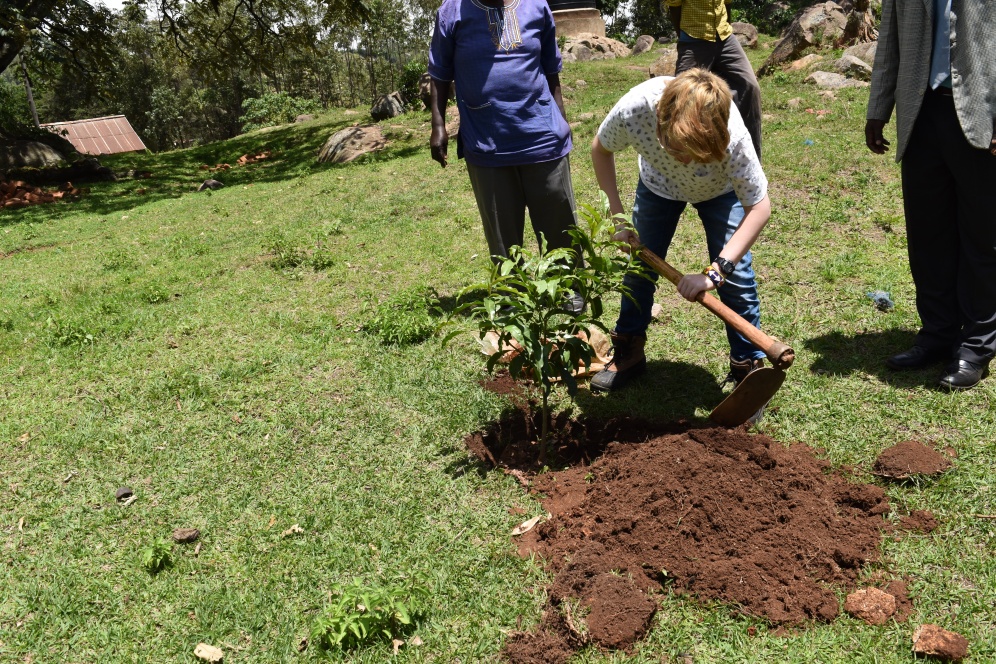 After a short rest under a nice shade tree, it was time for the presentation of the new books to the school. With the donated funds, Headmaster Atwera was able to procure about 60 textbooks and readers, as well as a new computer printer. He’d wrapped them all up — in heart paper, no less — so I could officially donate them.

The ceremony began with some of the male students signing and dancing a traditional tribal circumcision song. Wonderful Elizabeth from the School Board brought me up to the group to dance with her. Yes, in case you are wondering, you can dance to this particular rite-of-passage music. 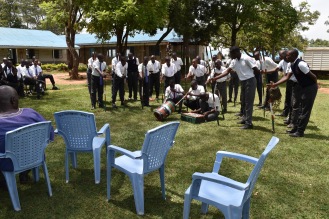 And then the speeches began — all of the adults,  as well as the head student, had a chance to talk about the meaning of moment. Each one of their beautiful statements — about discipline, about love, about family, about learning — brought me to tears.

As I presented the books to Headmaster David, I spoke to the students and staff about the generosity and goodness of America, as evidence by the gifts before me. I talked to them about the value of reading — and how my father made it a priority in my life and, as a result, I was able to write a book about him. I told them that books can, in fact, save your life or at least change your life. Writing my second book, DRYLAND, had indeed done just that. I reminded them the great literary value of books written in their own language, as the great Kenyan writer Ngugi wa Thiong’o, has repeatedly said. I closed my speech by saying, in Swahili, NAKUPENDA MARAGOLI NA MARADADI MUNZATSI SCHULE. I love you Maragoli and beautiful Munzatsi School. Allan, son David and I were then presented with a gift from the school — a wonderful painting of an elephant and her baby. Perfect. 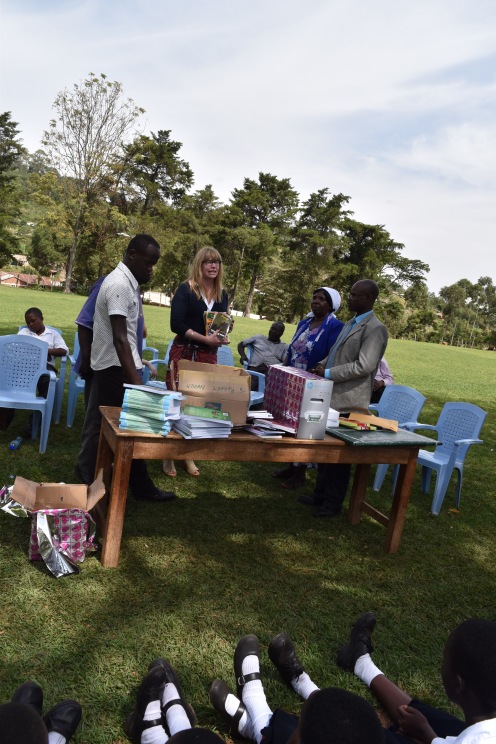 Our day-long visit ended with son David exchanging letters from students at his school with the students from Munzatsi. The start, we hope, of more communication between the kids and their countries. As we started driving back down the hills to Kisumu, I knew I’d arrived at new beginning in my relationship with the school. One of healing and hope.

Allan and I have since decided to fund a modest scholarship program for a Munzatsi student to attend college if he/she can pass the rigorous national exams, which requires a lot of reading and studying. The “Bercaw-Hansen Scholarship,” in memory of Tom Hansen — Allan’s best friend, a true book lover and compassionate world traveler, who passed away a few days after we returned from Kenya — will serve as a symbol of friendship, love, and the endurance of all that is good and true in this world. 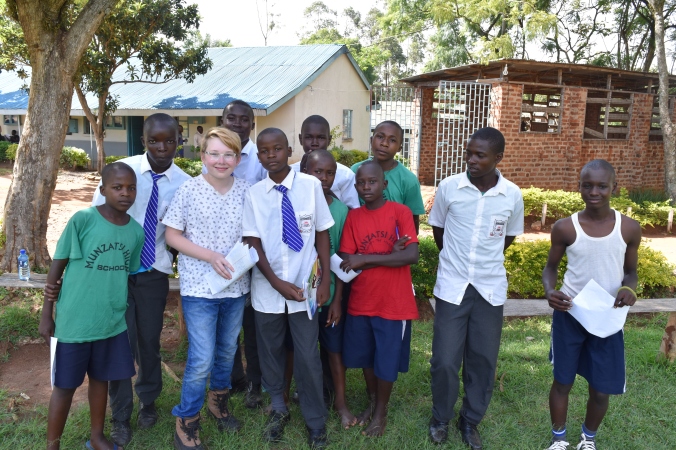 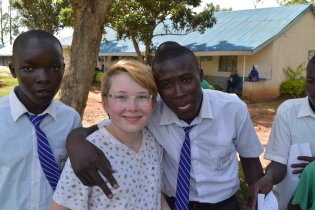