Last night I watched “The Sound of Music” sober. I’ve probably seen the film two dozen times, but yesterday marked the first time — since somewhere in my youth or childhood — that I watched the hills come alive without a drink in my hand. I saw things that I’d never noticed before.

Remember the scene in which Maria, about to marry the Captain, leaves the nuns behind the closed gates to walk down the aisle ? Yeah, well, I didn’t. Such a beautiful allegory for her transformation — and redemption — that plays out several times in the film and for a number of characters. Someone is always looking out, or in, from a set of gates. Poised to cross over and run free, or to stay behind and reckon with fate.

I was also struck by just how large Edelweiss bloomed in the full libretto: First, as the Captain reconnects with his children in song; and, then, as he bids adieu to his beloved Austria on stage.

I could feel the march of the Nazi insurgence more acutely in the film, too. There they are, lurking, long before they actually explode onto the scene.

So much in real — and reel — life has come to the fore since March 2014 when I left good-ole alcohol abbey to face a mountain of problems. Now it’s like everything I’ve ever seen is being re-broadcast in Technicolor.

Not only am I witnessing more and more, but I’m hearing

more too. Turns out the world is pretty noisy. Cacophonous, actually. Nearly deafening. People talk a lot, and over each other and in circles. Radios and television sets are played too loudly. Surround sound in movie theatres makes me shudder. Why does music have to play in shopping malls and grocery stores? I crave the sound of silence. Still, I like some of what I hear. 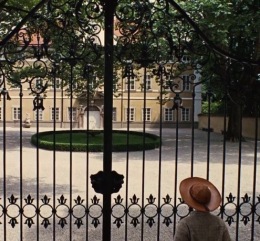 One of the reasons I love our new rural home is that the sounds are delicate. On my very first visit to see the place,  I learned just how in tune I am these days with noises. Walking up to the front door, I saw a hawk fly overhead and I could discern his wings flapping. The old hungover me would never have noticed the soft flutter. I would have been too fixated on the white noise in my grey matter.

Walking through the perfume aisle at department stores once guaranteed an instant headache and intense nausea. When the wave of indistinguishable smells engulfed me,  I’d hold my breath as if I were underwater. Now, I can make out the distinct scent of each flower — maybe even edelweiss, should it be present — and I linger to take it all in.

I also have a greater sense of the sadness or joy that haunts strangers. I can see when they might need brown paper packages tied up with strings. And I try my best to supply those favorited things, whenever possible. My energy is no longer spent on getting through the day. Rather, I seek ways to help others through their days.

My gates are wide open now, and everything is coming in loud and clear. Each moment, on this side of the mountain, feels like a drop of golden sun.