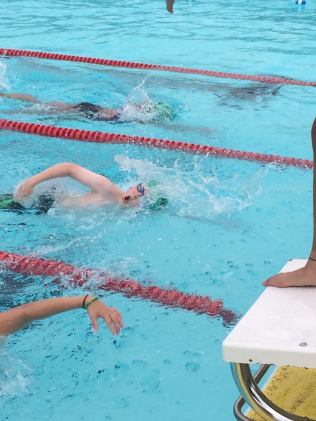 Another summer swim team season is in the books. It was jam-packed with my son’s dual meets and training sessions, with one or the other taking up every single weekday evening since early June.

Although I occasionally felt harangued by the scheduling, I mostly felt glad to be busy during what still is my witching hour — the timeframe in which I (prior to March 2015) used to settle down for the first cocktail of many. My son’s swimming turned out to be just the distraction I needed from old times.

Until I started going overboard on his times.

At every meet, I closely watched David’s races and delighted in the fact that he was improving. In early July, I realized that he was just a few seconds from making the State Championship qualifying time in two events.

That’s when I went bonkers — becoming obsessed with the cut just as I’d once been about any number of mine. I strategized (to put it mildly) with David about how to shave time in his race

s. I gave him pep talks before each race. We can always swim faster than we think we can. Start at 100 percent and accelerate from there. Hit the wall like you mean it. Rise up at the end of the rise. Conquer or be conquered.

I was annoyed when, time and time again, he wasn’t quite up to speed. Although he was improving his personal records — dropping second after second — he wasn’t winning races and he wasn’t making the cut. I found myself getting very frustrated. David could read my body language and noticed the lack of positive reinforcement. He cried his eyes out one evening and begged to go home before the meet was even over. On the silent drive home, I had a pep talk — with myself.

David is NOT me. He swims for fun and fitness. Not winning. He’s whole identity doesn’t hang in the balance with each race, each record, each cut, each victory. He loves the water. He’s
not at war with it, as I once was. And thank goodness! All of my fighting with time and competition in the pool went on to become a lot of fighting with real and imagined foes on land. I’m 50 years old, one year into sobriety, yet still fixated on winning — even projecting it onto my son who swims only to enjoy the summer breeze and share joy with his pals on the team. Stop it, Nancy. For once and for all, stop it.

Cut to Thursday night, at Burlington Tennis Club, the last dual meet of the season and David’s last chance to make the State cut.

One: I invited a photographer to use the gorgeous setting to take the picture for my book jacket.  Considering the subject matter of TANKED — swimming and drinking — I wanted my picture to have water in the background. But I also needed the picture to serve as proof that I was over all that shit. 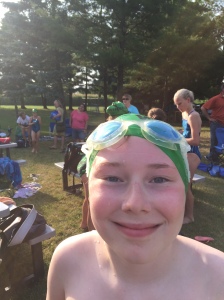 Two: I told David to enjoy the water and his races. To forget about the cuts and just swim for the sheer pleasure of it all. And I meant it. No pep talks. No mean face. No nothing.

We celebrated each moment. Each splash, not each stroke. Laughing at the silliness of little things, like the fact that I had to beg the snack bar operator to give us hamburgers for free since I didn’t have any cash. I usually volunteer as a race timer, but I chose not to on this occasion. Instead, I  sat contentedly  in my uncomfortable folding chair. Happily getting up to cheer on the other swimmers with David. For some reason we decided to scream things like “Carpaccio!” and “Cacio e pepe!” instead of “Go!” and “Get ’em!” After it was over, I hugged David and congratulated him on a terrific season. I hugged the coaches too, for having all the right values and for sharing them with my son.

Hopefully my author picture captured all this joy. When I look at it next year, sharing the story of TANKED, I want to remember these — the best times of our lives.