We were acting like a normal family on the evening of March 27, 2015, even though nothing was normal. A regular night would have entailed booze for me, video games for David, work for Allan. A regular night for any other American family would not have taken place in Abu Dhabi. But this night would be irregular any way I looked at it. 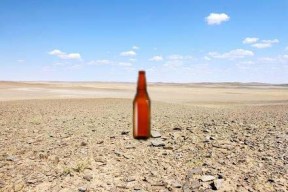 I’d become a raging alcoholic in the Middle East. And I was determined to un-become one in the same region. I’d terrorized myself here, and would redeem myself here. Whereas Africa had become synonymous with love for me and Asia tantamount to death, Arabia would go down in my history for being a lifesaving place.

By 6 p.m., I wanted to rescind everything I’d said to Allan in the morning on our way out of Burjeel Hospital. Or at least move my quit date to another time and place. But I managed to stop myself from begging Allan to go to Spinney’s for wine. He’d come home early to remove every trace of alcohol from our apartment. I was vacillating between being grateful and vengeful.

“I can’t sit at the dining room table without wine,” I announced when the meal was ready.

“So let’s start the movie,” Allan said. “TV dinners with Lawrence of Arabia.”

David cleared the coffee table and put the movie in the DVD player. I’d told him, on the car ride home, that I would no longer be having wine. And we’d find things to do together as family at night.

“That’s good,” he said flatly. “You liked wine more than me.”

A dagger of my own making pierced my  heart.

I sat between David and Allan as we ate our soup and watched Lawrence’s blue eyes dance at the sight of the sweeping desert landscape. I immersed myself in his journey in place of mine.

I sat bolt upright when Lawrence extinguished a match between his thumb and forefinger and William Potter painfully attempted the same. “The trick,” Lawrence explained, “is not minding that it hurts.”

Two hours into the movie, I longed to fill the vast emptiness inside of me with alcohol. But like Lawrence, I had to rely on water only to make a crossing.

We paused the film at 9 p.m. for David’s bedtime, and mine. I tucked him into his cozy bed, and Allan tucked me into ours. I stared at the ceiling, wishing I were back on the Bedouin blanket on the edge of the Empty Quarter as we had been at Qasr al Sarab the previous weekend.

I thrashed around in the bed. I opened the window to let a breeze into our room. I prayed to Allah, God, Elohim, Brahma, Vishnu, Shiva, Guru. Why did the world fight over which one should prevail? We need all of them. I need all of them.

Three years earlier, on this same date, my father lay dying in a Florida hospital bed. He believed in all incarnations of God, but relied most heavily on the one found in the King James’ Bible. Dr. Bercaw couldn’t speak at the end of his life but I knew he was talking to God. Meanwhile, I was in my hotel room drinking boxed wine from a gas station. A useless god to worship then and now.

I prayed in my bed. Father. My father. All fathers. All mothers. Help me through this night. This one night. After this I can do it. I need one day to pass so I can get on with the others. I need to be on the other side of this. Every second takes me closer.

Sweat poured down my temples. I closed the window and turned up the air-conditioning. I kicked off the covers, only to put them back on again. I opened the window again for air. I counted the number of times I rolled from right to left: 127. I tried to count sheep, but could only get to five. I thought of my father’s bravery. I fought my weakness. I closed the window.

When Allan came to bed, I asked him to sleep on the couch. I told him I was claustrophobic. He kissed my sweaty head, opened the window and headed back to the living room.

I quieted my head with the realization that even if I went in search of wine or vodka, I wouldn’t be able to get any. Spinney’s closed at 9 p.m. The British Club closed at 11 p.m. All the hotel bars and restaurants were shuttered by midnight. Unless I broke into another expat’s apartment, there was no way to get a fix.

Maybe I fell asleep. Maybe I didn’t. I lost track of time, but was awake when the 5:30 a.m. alarm rang. The sun was coming up over the canal. The immigrant laborers were in buses, bouncing across the desert, coming to serve the privileged. No doubt some of them endured t

heir daytime plight by had drinking the night away.

But I knew, beyond a shadow of a doubt, that I would never do so again.