Who could possibly move to a virtually dry country — where alcohol is a sin (haram) — and find a way to drink themselves silly? A place where you have to skulk into a windowless nonchalant building on some side street and carry out your booze in a telling and shaming solid black plastic bag? A place where you, not the venue, needs a liquor license?

At some point in the last seven months, this desert mermaid decided to start stuffing her gills with vodka and wine every night. No worries, I convinced myself, I was just celebrating:

I’m blogging a funny story! I got the job! I’m in Oman for the weekend! I made new friends! I’m going to Jordan in two months! I saw a camel!

On other occasions, I just needed to calm my fears:

I’m on an airplane over ISIS-controlled territory. My son got punched in the face for being an American. An American teacher got murdered across the street.

I was waking up hungover, and daydreaming of happy hour as soon as it wore off. The harder I worked out on the treadmill, the greater my evening reward would be. The better my writing was, the greater my drinking could be. If I did this, then I could do that. Always bargaining. Ever justifying. Never enough.

My whole life has been based on a reward system of my own making. Swim fast = ribbons + medals + trophies + college scholarship. Write well = recognition + awards + books + money. But somewhere along the line, drinking became the best prize of all, and I didn’t have to work that hard to earn it. I just had to make it to 5 p.m. and victory was mine. A trophy in the shape of a bottle.

A few years ago, I quit drinking for a good long while. Although I felt fantastic, I struggled with the loss of my party-girl persona. I also wasn’t sure how to reward myself. I slept a lot. Sometimes I’d drink a six-pack of non-alcoholic beer to celebrate the fact that I wasn’t drinking real beer.

Somehow I got from there to here: an expat in Abu Dhabi with a drinking problem. Hiding how bad I felt every morning from my husband, my son and my work. Yet ready for a repeat performance every night. I’d pass out instead of falling asleep, and snore so loudly that my husband couldn’t stay asleep. I was popping Advil for my headaches and Maalox for my heartburn. But I convinced myself that I wasn’t an alcoholic because I could still run 5-7 kilometers on the treadmill every day. Truth is, I was running to sweat the hangover out. Clearing out to refill. 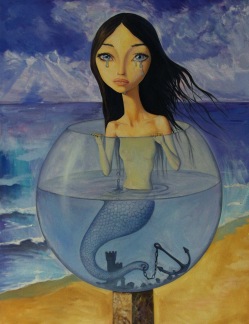 Ten days ago I went to the doctor to get a refill of my antidepressant. (Yes, I was fully aware alcohol also is a depressant, which means I was making my own depression worse.) Anyway, the nurse took my blood pressure, which I figured might be a bit high from my chronic celebrating but offset by my fanatic exercise.

Not good numbers. I prefer 11, which is the age of my son. I like 23, which was my time in the 50-yard freestyle. In fact, I really like 50, which is the age I’m soon to be. But my diastolic and systolic readings were tarot cards saying, “you’re number is up.”

That was March 29, ten days ago. I haven’t had anything to drink but water or coffee since. I’m no longer a mermaid trapped in a bottle. I’m free. I plan to stay that way. Afloat. I’ve been so worried about Alzheimer’s disease in the future that I lost sight of the greatest threat to me in the present — alcoholism — a disease that also runs in my family.

I’ve invented a new reward for myself. It’s better than “Happy Hour” and it’s called “The Morning.” I get to wake up clear-headed and, mostly, light-hearted. It’s not easy. But it’s a new kind of daily victory. And I do like to win.

The best news is that I’ll leave Abu Dhabi without the demons who followed me here. They drowned in the desert, instead of me.