We are back in Abu Dhabi after a four-day trip to Jordan — a trip we almost didn’t take because of the heightening ISIS conflict. Amman, the capital, is merely 95km from the border with Syria. We thought that might be too close for comfort. But, one of us being a Bercaw, the idea of a trip to the Holy Land in the midst of an unholy war was irresistible. I had to go. And I’m so glad we did.

Jordan needs us right now. You, too.

Since the Arab Spring, tourism is down 80 percent. Since ISIS burned a Jordanian pilot, and the Jordanians retaliated gallantly and quickly, tourism is down even more. In the best of times, thousands upon thousands of tourists visited Petra daily. People used to start lining up at the gate at 4 a.m.

But these aren’t the best of times. On our tour, David and I were two of about 20 people at the entire site. The Jordanians who offer camel rides and coffee or sodas inside Petra outnumbered us. And, for the most part, sat dejectedly with few sales.

Throughout our entire stay, we did our best to engage with as many locals as possible. We had a superb driver — Alaa from Jordan Direct Tours — who escorted us all around his beloved, brave country, including the sites of Petra, the River Jordan and Mount Nebo. When we were hungry, he bought us chicken swharma and Pepsi. When I was cold, he gave me his own jacket. When we were afraid of the mountain curves, he slowed his car down. Alaa also hooked us up with the best tour guides in each locale.

Inside Petra, under the expert guidance of Zaid — who also was a phenomenal photographer — we purchased both a carriage ride and a horse ride, bought souvenirs and had a humus lunch. Zaid told us great details about the Nabatean, the founders of Petra. A people who left Yemen as thieves and then transformed themselves, as well as their destination, into grand pillars of history.

The few tourists in Petra with us seemed oblivious to the dire financial situation of our hosts. Grumpy self-absorbed expats plodded along, irritated by the locals’ pleas to ride their camels and horses. Probably staying in 5-star hotels somewhere — and paying $20 for a cup of coffee in morning — they couldn’t be bothered to give a few Jordanian Dinar to the people who inhabit this land and make a living by offering their services. 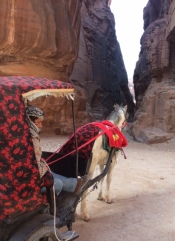 As our tour wound down, David and I returned the gates of Petra on our horse-drawn carriage with our Bedouin driver. I overheard a self-righteous English woman exclaim, “THAT POOR HORSE!”

I almost jumped out of the carriage and pummeled her. Poor horse? This horse is beloved by his Bedouin owner! They are partners in life and work. Listen, privileged lady, it’s the people of Jordan who are suffering, not this horse. Besides, this history makes yours look like a flash in the pan. And your manners, my lady, are Neanderthal in comparison.

Truth is that the Bedouin don’t need anyone or anything. They live in tents, and tend to their animals who also have their own tents.  Together, the Bedu and their livestock spend all day working the land. Also, of note, Bedouin hospitality is unrivaled anywhere. They welcome visitors/strangers — of any color or creed — into their homes for food, shelter and friendship.  These people, who own very little, will give a guest everything they have. 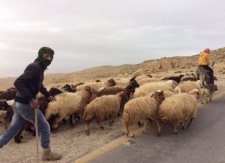 Like Lawrence of Arabia, I am obsessed with the Bedu. Seeing them roaming the hills was as much a highlight of this trip as the Dead Sea, the River Jordan, and Mount Nebo.

The Bedu, and their animals, are the living embodiment of my favorite poem, “The Beasts,” by Walt Whitman:

I THINK I could turn and live with animals, they are so placid and self-contained;

I stand and look at them long and long.

They do not sweat and whine about their condition;

They do not lie awake in the dark and weep for their sins;

They do not make me sick discussing their duty to God;

At one point our driver Alaa stopped at Bedouin “coffee shop” high up in the mountains so we could enjoy the view and some of the famed hospitality. The shop was a one-room house with an old stove and single bed. The Bedouin are the originators of the Tiny House trend sweeping the West.

The proprietor made us the strongest coffee I have ever tasted. When I gave him 2 dinar, he seemed surprised but grateful. David and I liked exploring his little slice of heaven that he designed with visitors in mind: a WC; some sofas; and a handmade Welcome sign over a stone arch.

I could have lingered there all day, the sprinter in me on hiatus. But I must confess that I could not stomach the strong Bedu coffee so I secretly poured some out on the mountain.

Sitting on one of the couches out front, I thought about all the stuff I own that weighs me down. Why do I have more than 5 pairs of jeans? And a dozen black shirts? I have two couches in our South Burlington, Vermont home. Tha

t is one too many. I do like that my current house — and I’ve called many places home, like the Bedu — is small and efficient. Maybe I will actually keep this one. Maybe not. I don’t like to be pinned down.

One thing I know for sure is that I’d like to come back to Jordan again, and maybe cross over to Israel by land. A land that was a mere 10 meters away from us at the Jordan River. A reverse pilgrimage.

At the airport in Amman, on the way back to Abu Dhabi, we found ourselves in a rather unusual situation. Our gate area was filled with Iraqis. Hundreds of them, heading to Najaf — a key target in the U.S. invasion of Iraq in 2003. Amazingly enough, in 2014, after Christians were forced to leave areas that fell under the control of the Islamic State, the Muslim people of Najaf opened their doors to receive them. They didn’t blame Christianity for what happened a decade earlier.

What was this group of Iraqis doing in Jordan? I can’t imagine. But they were very curious about blonde me. Some smiled and nodded their heads. Some looked confused. I probably looked confused too. I’ve never seen a group of people quite like this. Indeed, David and Allan and I were so mesmerized that we missed the first boarding call for our flight.

You never know what can be found in Jordan.

So come, and find yourself here.