David and I flew into Amman, Jordan early this morning. A lovely flight over the Saudi desert with lots of lovely Jordanians on board. We were the only Westerners on the Royal Jordanian airplane, where not a word was spoken in English nor written in the newspapers that were handed out.

After landing, we had to walk down a stairway to get on a bus for the terminal. A very elderly Jordanian woman carrying a big bag of brand new legos was having trouble battling the strong wind and the steep stairs. I took her bag and put out my arm. Together we made our way down to the tarmac. I was in heaven when she smiled her appreciation.

Isn’t that why we all come to Jordan? To get closer to heaven?

Within minutes of clearing immigration, David and I were in the back seat of a hybrid car with Allah behind the wheel. I’d prearranged all our transport in advance to avoid as many unpleasantries as possible. But Allah’s presence was an unexpected bonus!

Truth is that I tried to cancel this entire trip after the immolation of the Jordan pilot by ISIS last week. When I wrote to Amira at the tour agency, she said, “I can assure that Jordan is safe and we will take care of you. Jordan needs you.”

Amira made sure that Allah was waiting for us.

Once inside his car, Allah handed me a mobile phone. He said we could call him at any time for anything and that he was on speed dial. There were only two options.

“But there is only one Allah,” I said. It just came out.

Allah, who lived in the Bronx some time ago, laughed mightily. “Good one, but my name is Alaa,” he said, spelling it out.

Of course there’s a snowstorm coming. I mean why travel to see the Dead Sea in perfect weather? Anyone can do that! 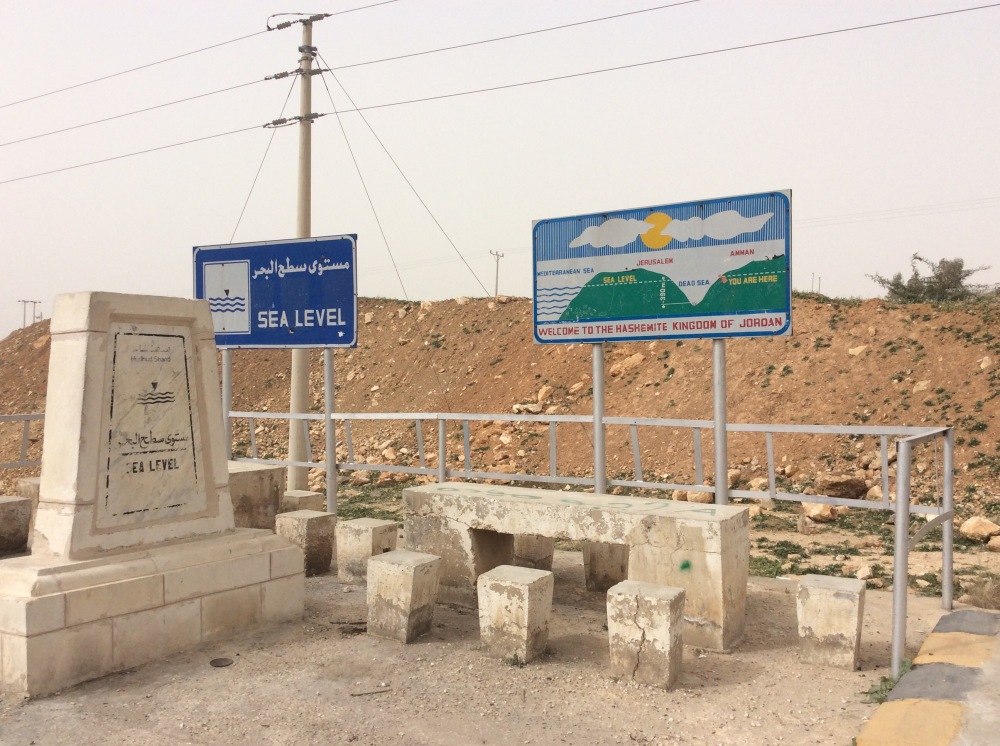 Anyway, we made our way through a sand storm to our hotel — about 45 minutes from Amman. We went through two armed guard security checks en route. I told Alaa that I appreciated the extra security. He said that he was glad too, and then proceeded to quiz us on Jordanian history. He had to answer his own questions because we are idiots abroad, at least on this trip.

What was the name of Amman under the Roman Empire? Philadelphia.

What does Petra mean? Rock.

How many Syrian refugees are living in camps in the North? 750,000.

He also told us that Jordan is unique in that the country is small but home to many histories. Most big places, in fact most places, just have one story. Jordan is an epicenter of huge moments in time.

We arrived at the hotel, after passing through security at the entrance gate. We also had to put our luggage through an x-ray machine before we could even enter the lobby. Alaa escorted us in and asked the desk clerk to give us a sea view. She did, even though we basically can’t see the sea through all the flying sand and fog.

Alaa headed back to Amman; David and I sat down in the lobby and ordered a big plate of spaghetti. 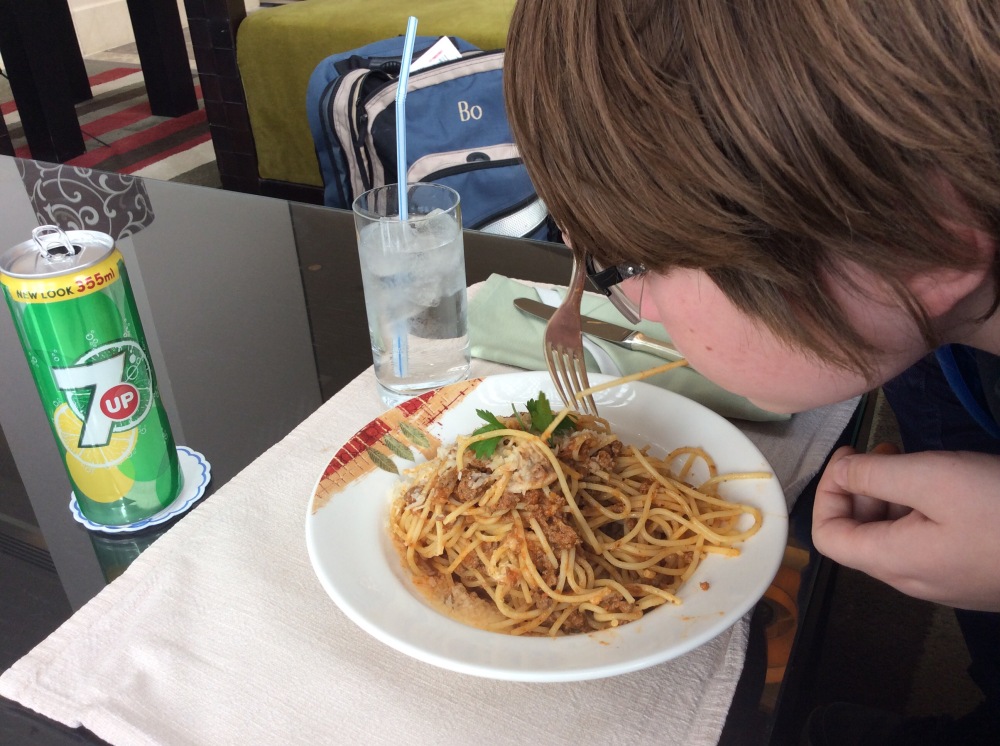 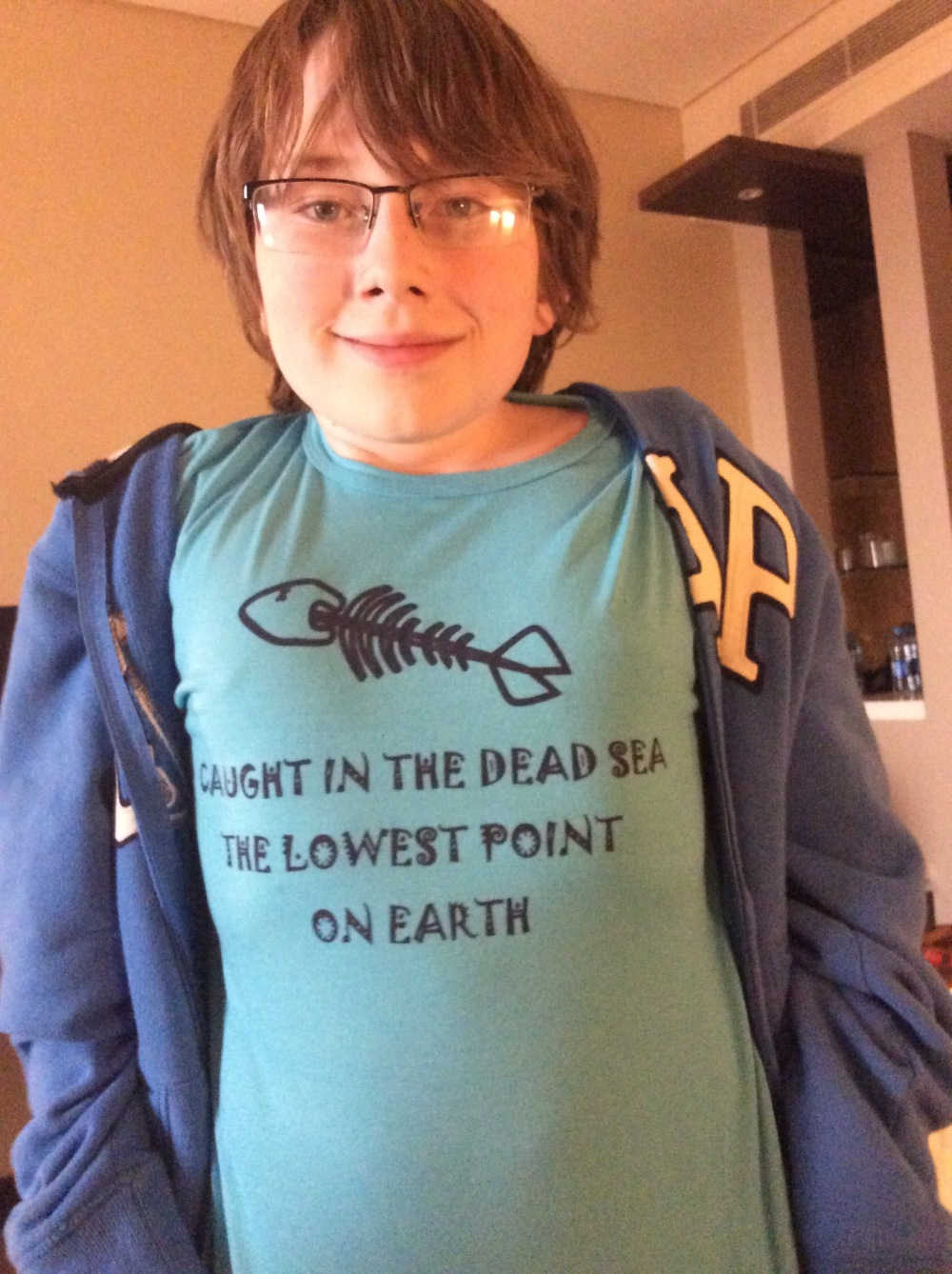 Afterward, we battled the wind and made our way down to the sea to see the lowest point on Earth. It seems unlikely that, given the worsening weather, we will be swimming in it. We couldn’t even get to the beach because the sand was flying into our eyes. 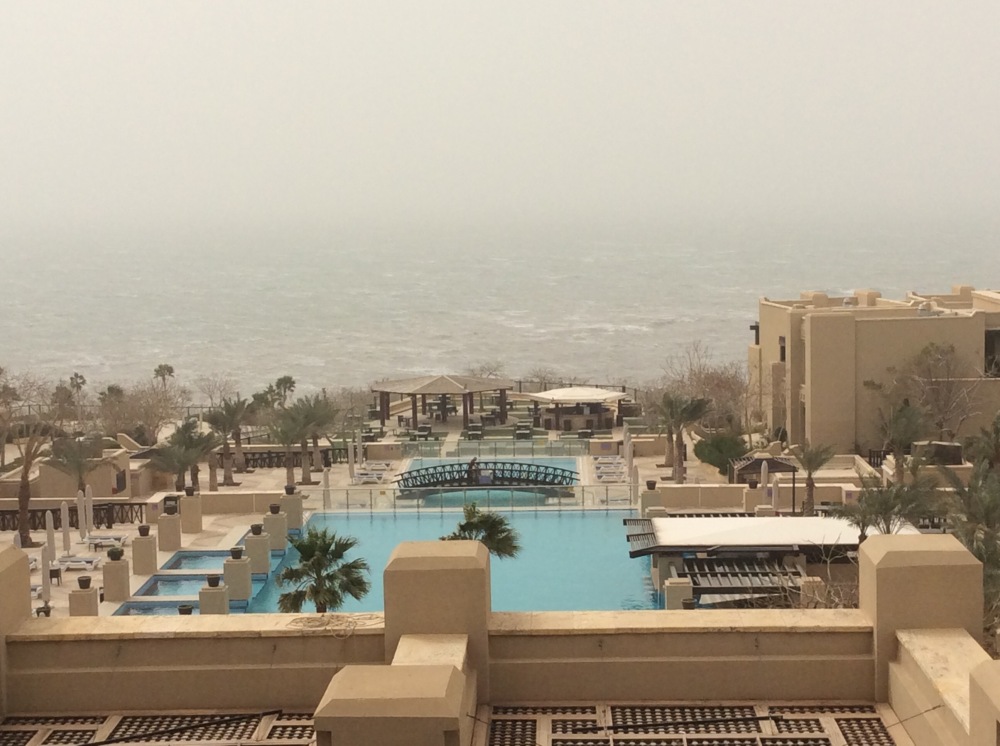 David suggested that this great big salty body of water be renamed the Harsh Sea. I could barely hear him because of the wind, and because my ears have not adjusted to the pressure of being below sea level. I feel like I’m in the deep end of a swimming pool with scuba equipment.

But I’m in the Holy Land with my son David, and Alaa on speed dial.

Weather or not, it doesn’t get any better than that.