American Thanksgiving isn’t big in the UAE. Not even with Americans, really. David had a full day at the American International School, and I had a full day of work at my American-style University. Allan had the day off from the New York Film Academy, so his job was to pick up the dinner.

Yes, pick it up. Ready to eat. Ride ’em cowboy!

The British Club — not even an American establishment — supplies turkey and all the trimmings in a big box for Thanksgiving eaters and again in December for Christmas celebrators. The reasonably priced box comes complete with  a carving fork and knife as well as A CHEF’S HAT.

We invited two gents — an Australian cinematographer (best known for directing the photography on Priscilla Queen of The Desert) and an American filmmaker (who is part Native American) — from NYFA  to enjoy the pre-cooked festivities.  Of course we gave the guest with the blood of an original American a chance to carve the turkey. We all took turns wearing the Chef Hat. 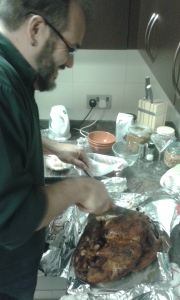 Americans, tell me, have you ever had bread sauce for Thanksgiving? Or were those sneaky (albeit outstanding) British chefs at the club trying to send us a message about the holiday: You can run Americans, but you can’t hide from the Empire. We’ll infiltrate your Thanksgiving celebration with BREAD SAUCE. And you’ll be forced to remember your British roots.

Hey, British chefs, we have a message for you: NOT ONE OF US TOUCHED YOUR COLONIALIST BREAD SAUCE!

Love from a Yankee in the Emirates,