I have been hit with some disorienting observations along with the astonishing reality that we live in Abu Dhabi.

I think what David is trying to articulate is that his perception of his place in the world has changed. The force of gravity remains the same, but the gravity of our situation has intensified. Life in Abu Dhabi is dizzying despite the relative slow pace of this place. Our brains on are on fire and not because of the heat.

For example, the street called “Sultan Bin Zayed the First” was once known as Muhror Road, which makes it hard to know where you are at any given time. You

must tether yourself to a landmark, in addition to a street name, if you wish to avoid spinning on your axis.

We find ourselves going to the locations (aka our new centers of gravity) that we know how to explain, like the Al Wahda Mall. We have seen three films at the mall simply because we can get there from here without issue.

I’ve also read two books since arriving–perhaps to avoid going anywhere at times. One is called, “Brain on Fire: My Month of Madness,” by Susannah Cahalan, about the period of time when her right brain (not the left) was inflamed with a rare form of encephalitis, and she lost her memory, as well as her proprioception, and nearly her life.

Maybe it’s because my father was a neurologist, but I’ve long been fascinated by “proprioception,” which is the ability to sense stimuli that signals your position, motion and equilibrium in relationship to the world. Even if a person is blindfolded, he or she knows through
proprioception if an arm is above the head or hanging by the side of the body.

But Cahalan lost the sense of who she was in relationship to the world because of her strange sickness. It took more than a year for her sense of proprioception, as well as her perception of herself, to return. And she’s written one hell of a book about the hellish journey.

Midway through the book, I realized that I’d heard something about this story before. Back in 2011, Simon and Schuster had just signed a contract for “Brain on Fire” when they were reading “Brain in a Jar.” They ended up turning my book down because they’d already committed to another young journalist with a neurological story.

Of course, I wound up with the publishers I was meant to have, both in the US and in India. Publishers who became friends and have expanded my world.

Yet how delightfully odd it is to be Abu Dhabi–where our perceptions are so utterly challenged that it feels like our proprioception is off–and to suddenly make this connection with Susannah Cahalan’s book.

The ever-so-perceptive David pointed out that her cover picture even looks like a younger version of me.

I don’t mean to get all Dr. Who-y, but I do like all this timey-whimy stuff. I prefer being in a place that confuses me because it requires me to think long and hard for directions, solutions and resolutions. Something I may not be able to 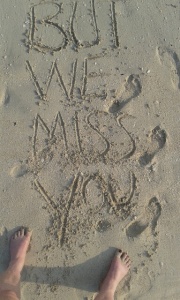 do in a decade or so if Alzheimer’s comes for me the way encephalitis came for Susannah.

The cost of mental and physical adventure is great, though, I will confess. I miss my friends and family very much, especially the grand babies who I love beyond all sense of myself and time and place.

The toll is great on our son David, too, who this morning said, “I’ve accepted that I will be alone here for a while.” When I looked at him sadly, he responded, “Don’t worry, I’m not unhappy about it.”

He will have friends soon, and I’ve gathered a few kind acquaintances in the two weeks since we arrived.  Allan, not surprisingly, knows everyone.

But for now, I’m finding out what it means to be me in the U.A.E. after so much time focusing on the DMZ and AD.