Day one has come and gone. I am invigorated.

I had a secret fear that I’d hate Abu Dhabi. Yet, I also figured that if I expected to dislike this place, then I might actually like it because of my extreme case of opposite disorder.

But I never expected to love it. And that’s not my jet lag talking. In fact, jet lag makes me hate everything, so I must really really love this place.

Abu Dhabi is Zen. I worried so much about what to wear here yet I see that expat clothes run the gamut from full coverage to very little. I feel, speaking of opposites, very demure for me. But heck, I also feel free to change it up as I see fit. Phew.

We started the day at Jones the Grocer, an Australian restaurant frequented by the Sheikh, where we hooked up with an American acquaintance who goes by the name of Ellen–although I believe she should be called Wonder Woman.

Ellen had a day off from her job with the National newspaper, and devoted half of it to showing David and me around the city.

A city, she explains, that seems to be designed in the shape of a uterus.

“And we’re on the right fallopian tube, now?” I asked at one point.

While in that “hysteric” location, we popped into David’s new school to get the lay of the land. We were able to acquire one school uniform in a rather un-uniform fashion. There was no line at the small shop and people were randomly calling out for pants or shirts or gym shorts. I felt like we were in a game of uniform bingo and the chips weren’t falling in our favor. 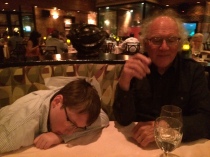 After his work day, and a three-hour nap on my part, Allan surprised us with a celebration dinner at Trader Vic’s Restaurant.

The Spanish all-female band, who were dressed like the Kardashians, entertained expats and Emirates alike. Half of these diners were half-naked; the others fully covered.

Talk about opposite disorder. No wonder I feel at home.

By the end of the meal, David was asleep on the table. I was talking to our Filipino waiter who didn’t believe that I was from his country. Allan was singing along to “Stand By Me,” as played by the band. And I was glad that we have stood, slept, and swam together through so many clothes, goodbye tears and time zones in order to get here.

NSB in the UAE