This morning I leaped out of bed to get downstairs for my two eggs, toast and coffee. Actually, it wasn’t the food that I was excited to see, it was the ebullient enunciating lady-chef. And there she was in her white-clothed glory ready to greet me.

“GOOD MORNING DARLING!” she called out to me.

“GOOD MORNING DEAR!” I called back to her.

I devoured my eggs and read the Korea Times. I had three cups of coffee and wondered what the day would bring. I wanted to go to a bathhouse, but which one? I asked the young man at the reception desk for a recommendation. He wrote the name of a jimjilbang in Korean on a piece of paper for me to give to a cab driver. It worked like clockwork.

By 9:20 a.m., I was at the Siloam Sauna Fomentation Bathhouse. The place features five floors of things to do: a nap room (you know I love that); an entertainment room where you can also nap; the fomentation areas for salt, jade, charcoal and any number of ways to sweat the toxins from your body; bathing areas for men and women (separate); and locker rooms with food and drink. Truth is that you are welcome to nap in every nook in cranny in addition to the designated areas.

Everyone is issued an orange t-shirt and knee-length red shorts for enjoying the Fomentation rooms. I tried each option and decided that laying on a bed of salt in a 48-degree Celsius room was my favorite. I was the only Westerner in the Fomentation areas, but my fellow Korean Fire Pot Fomenters seemed to appreciate my presence. These rooms are all co-ed, and children participate too in the experience.

The goodwill spilled over into the bathing area, where I walked around with bare naked Korean ladies. I made many mistakes in protocol, but the ladies were there to help me out. The worst thing I did was to dip my long hair under the water in the wormwood hot bath. A kindly woman handed me a rubber band. She pointed to her head, hair pulled up in a towel, to show me the right way. Instead of being angry with her, like I might have in 1988, I thanked her profusely and bowed my nakedness in appreciation.

Why would I have been angry with her in 1988? Because I was a recalcitrant ass back then.

Anyway, I was detoxified and sparking and downright bubbly when I left Siloam. I decided to take a cab to Itaeown, where I spent many nights drinking big giant beers in 1988 and dancing at the clubs favored by GIs. It was the only place in Seoul I liked in those days. 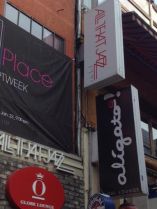 Guess what? I didn’t much care for Iteawon this time around. I could only find one of the clubs I used to frequent, called All That Jazz, and I lost interest in the search. Nor did I have any interest in hitting Starbucks or Taco Bell. I did pause at a small shop to buy a silver necklace that says “Mother” in Korean and then I high-tailed it out of there. Being a mother is the most important thing to me, not nightclubs.

On the cab ride back to my hotel, the car passed the Korean War Memorial.

“YOGI!” I said to the surprised cab driver. “YOGI!”

He pulled over and let me out. We laughed at my rudimentary yet effective Korean. There was a time, long ago, when I became enraged with a Korean cab driver who took me to the wrong place. I stuck a fingernail in his cheek and ran away.

Why would I have attacked a Korean cab driver? Because I was a recalcitrant ass.

As I walked toward the War Memorial, a well-dressed very old man called out to me.

“What country you from?” he asked.

“USA,” I answered, as I walked toward him.

I could see that he had something in his hand that looked like a checkbook. I really hoped he didn’t want me to balance his checkbook because I can barely do basic math.

I sat down next to him. He showed me his little book. He was working on English phrases and words. I marveled at what he had written, and most notably the phrase: Don’t fish in troubled waters.

I do the same thing with Korean since I can’t read Korean characters. I write in English what the Korean words sound like, as in the case of Jimjilbang, which means bathhouse. Koreans would not recognize that word written in English but they do when I pronounce it. If I pronounce it correctly.

Unlike my usual sprinter self, I felt no need to get away ASAP. I wanted to sit with him all day. We talked for a while, and here’s what I learned: He is Chinese and lives not far from the Memorial. He likes to sit on the bench on sunny days. He has false teeth. He is a doctor of Chinese medicine.

“How did you come to live in Korea?” I asked.

My eyes filled up with tears. I was sitting with someone exceptional in so many ways. 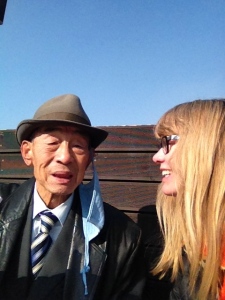 I helped him with more words. We filled up the page.

After a while I got up to go visit the Memorial. I spoke the few words of Mandarin I learned in Singapore in 2010: thank you, happy new year and goodbye.

He liked this very much.

And suddenly I found it very difficult to leave him. I could tell he was feeling much the same.

“I wish that I would see your face again one day,” he said.

I wished the same, and fought back tears. But it’s okay to see someone only once in your life. I will never forget that man, and the suffering he has endured in his life. And the tenderness we shared over that little language book.

His effect on me was so great that I having been crying all afternoon. A situation made worse by walking through the impressive War Memorial of Korea. So much suffering represented in one place: His. Mine. Theirs. It belongs to all of us.

I used to pit one thing against another when I lived in Seoul in 1988. Americans vs. Koreans. East vs. West. North vs. South. Nancy vs. Everything.

See this statue? It represents a moment of absolute horror during the Korean War. A South Korean soldier encounters and embraces his brother, fighting for North Korea, on the battlefield. Shared suffering.

According to its signage, “The Statue of Brothers” expresses reconciliation, love, and forgiveness. The image is powerful indeed.

Equally as powerful as the sight of an elegant Chinese Medicine man, who once was in a Japanese Labor Camp, sitting on a bench in Seoul, South Korea and working on his English.

Thanks to the Brothers statue and my Chinese friend–as well as the lady chef, the bathhouse women, and the cab driver–a divide in me continues to heal.

These are our 38th Parallel Lives.

P.S. Tomorrow is my DMZ tour.