I discovered this poem, “Monsoon,” by Edie Rhoads, on a total fluke today in the library where I work. I was getting a cup of tea (which I rarely do) and was waiting for the hot water to get, well, hot. 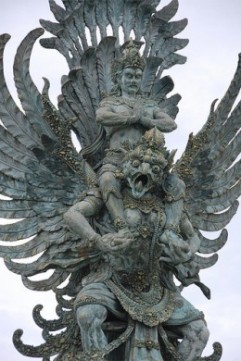 Next to the sink are shelves upon shelves of yet uncirculated materials. I reached out and grabbed one of them with no words on the spine. A small innocuous book. I opened it up to see the following poem and was surprised to see the word, “Garuda,” in it.

My father was fascinated by the Hindu god Garuda, who was a slayer of snakes and the mount of Vishnu. I brought my father a statue of Garuda from Cambodia last year. It sits on his bureau at Juniper Memory Care.

Upon reading this poem, I realized that the “monsoon” could also be Alzheimer’s disease—–a force that comes in and changes the landscape, and forces us to rise up on wings of eagles.

During the 10 minutes I devoted to transcribing the poem, and thinking about it, five publishers asked agent Priya if they could read the manuscript about Beau.

Have faith in all things, my father used to say to me. Even the scary things. They will teach us something, too.

In the gulf gathers blue bellied
Garuda, god of courage. His wings
sweep stiff winds across the bay, his beak
blots out the sun. At his command,
clouds compose weight, a black line
smothers horizon and the sea yields,
mute and opaque as a blanket.
His eagle’s talon hooks and sinks,
shearing heat apart. They sky vents silver,
wet air lifts and voids fill with sound.
From the ground up, the wind snaps shut.
Spindles of liquid plink one by one
against skin, then begin their restrained
multiplication. The tide heaves
toward cliff rocks, yawning
into white veined breaks; automatic,
the way breath is, ragged, building.
Lancing up, an enormous pressure in the reefs
seals plates of ocean in to sharp
blades: waves. Satin splinters
Chase across scalp, make my dress
a skin of skin. The body waits.
And then the great collapse – sunk vertigo,
tremendous suck of undertow
beckons. Drop shoulders back,
look up, it won’t stop, red mud gone
to slick batter underfoot. Nectar,
stolen from heaven, an anti-venom,
gift of the monsoon. Garuda polishes
sickness, disintegrates what’s become
brittle with sun. Rain dismays the bougainvillea,
turning petals to paste on the forest floor.
Serene jet-black snakes coil, shunning
these quick cold sutras. His list:
slick down banana leaves, varnish green
this jungle of vines. Teach decomposition
to the sun-stunned coast. The storm ends.
In the distance, a used-up day gleams redly
Between the god’s heated feathers.