If memories create identity, who are you if you lose those memories?

My cousin, also named Nancy Bercaw (as was our grandmother), recently found this letter (in her father’s things) that my father, Beau, sent to Santa a long, long time ago. (Talk about mistaken identities with all these Nancy Bercaws and Bercaw fathers!)

The letter says a lot about who my father was as a child and portends the man he grew up to be. 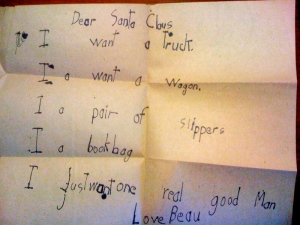 I want a truck.

I a want a wagon.

I a pair of slippers.

He forgets to use the word “want” in the middle of his letter, and uses an extra “a” in the second request. Knowing my father, I suspect that he wrote “I” five times down the page and then filled the sentences in. A very systematic approach to a wish list. Beau was “Beau the Mathematician” at age four.

My father was so smart that he skipped second grade, but then couldn’t remember if the spaces fell between the words or within  them. Even then, his brain was more concerned with content than format. His thoughts had outgrown simple sentence structure.

Take a good long look at the last line, “I just want one real good Man.” Beau’s father, by all accounts, was not a real good man. He was known to be cruel, especially to his children and wife. Little Beau was asking for goodness and kindness from Santa: A father-figure he could look up to and be loved by. Beau’s wish list turned into a plea. Something joyful wrought with sadness. This is Beau in a nutshell—-at any and every age.

Guess what? My father got his wish. He turned into the “one real good Man” he wanted.

As a grown up, Beau always got me EVERYTHING on my own wish list. He could be miserly at other times of the year, but Christmas was the exception. He went overboard. Such a good Man, indeed. I couldn’t have asked Santa for a better father.

So whether he knows it or not, Beau is and always will be “Beau.” He was Beau before he knew it, and he’ll still be Beau forever. Identity doesn’t disappear with Alzheimer’s Disease.

One of my father’s old friends and colleagues, Dr.  Steven T. DeKosky, professor of neurology at the University of Virgina, contacted me after he heard about Beau’s illness. Dr. DeKosky wrote me a note that included the following comment:

I wanted to send my sympathy and let you know that I remember him as I remember many of my own friends and patients–as remarkable people even during their illness.

You are you before you know it, and long after you forget it. Remember that.