I wish there had been a peep-hole in time and space on October 28, 2018, so that you could have had a glimpse of my favorite worst trip in recent years. 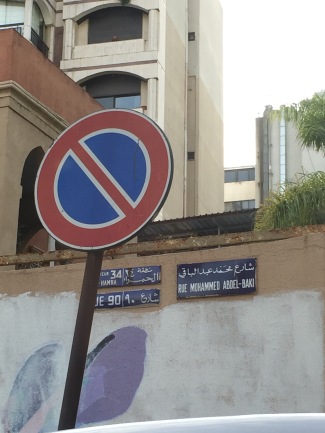 There are several distinct scenes of which you could have viewed. None of which seem connected to the other, as if they happened to different people.

There’s the scene(s) of me walking with my briefcase up and down Hamra street in the center of the bustling city trying to find a cafe with working internet. (Because my stupid guesthouse has the poorest excuse for WiFi connection that I have ever encountered.) I didn’t feel like a tourist in this scene, I felt like a deranged businesswoman on a mission. Adding to the absurdity of this scene is that I neglected to pack my flat sandals, so my walks were in kitten-heeled black pumps. (Why, Nancy, why?) 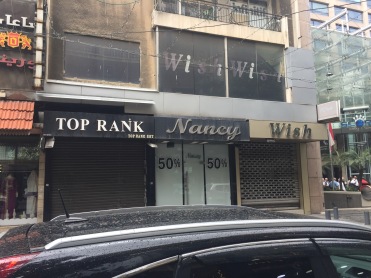 Anyway, I came to Beirut with the hopes of getting some writing done — and it has not been done. Except for right now, in the Rossa Coffee Shop, which is not where or what I expected to be writing. Somehow, I did manage to get my PowerPoint presentation for Seoul prepared two days. But now I don’t want to go to Seoul, or anywhere. Ever.

There’s the scene of me at the Emergency Room from 6 a.m. to Noon, where I recovered

nicely with IV fluids from whatever was making my stomach rid itself of everything I’ve tried to digest since 1976. The doctors at the American University Beirut Medical Center were fantastic. I felt right at home there and was happy to just lay in my cozy bed at the ER and watch the sick world roll past. My main doctor said that a remarkably large number of tourists end up in the hospital in Lebanon from food- or water-borne illness. When I told him I’d been in India, he said, “We’re just as bad as India.” I was surprised. He was not. He loaded me up with Cipro and Flagyl and anti-nausea meds and pain meds. I’m feeling MUCH better 24 hours later and am sipping coffee in the aforementioned coffee shop with my briefcase and kitten heels.

There’s the scene of me getting a massage yesterday evening. Yea, that’s what I did about six hours after getting out of the hospital. I needed to do something! It was a good message, although it was the kind of place where men might enjoy a special treat. Whatever. I appreciated the eucalyptus oil and the massage of my incredibly tense neck and shoulders.

And then there’s the scene that I am not in. At no point have I put so much as a toe in the Mediterranean Sea.

Something I have never managed to do. Whatever. At least I left Beirut with my insides intact.

One: I stayed at the worst guest house ever. Actually, at age 52, I should stop staying at guest houses. I only ate food there, so that’s what made me sick. The last two guest houses resulted in my son getting Dengue Fever and myself getting whatever this is.

Two: On my walks up and down Hamra street, I was distressed to see a large number of displaced Syrians begging for food and money. As we are all painfully aware, there’s a shitload of bad shit happening everywhere. My stomach is merely a metaphor.