A force of nature swept into Ajman on September 15. Not a sand storm, which is all too common in these parts. Not a rain storm, which is an all-too-rare occurrence around here. Instead, those of us living in the Northern Emirates were treated to the power of Maysoon season.

If you haven’t heard of Maysoon Zayid yet, it’s only a matter of time until her sharp wit gets under your skin and her storytelling smashes your heart. When she’s done twisting your innards, you’ll see the whole world with fresh eyes. Moved by her candor, you might even be surprised by what pops out of your own mouth.

I’m reluctant to label Maysoon in any way, shape or form, but she is (among other things) a comedian, actress, disability advocate and tap dancer. She’s also an Arab-American from New Jersey, who spent every summer of her youth in Palestine. These days, she runs an arts program for disabled and orphaned children in Palestinian refugee camps. She helps children use art to deal with trauma and to bridge the gap between disabled and non-disabled children. And she does it ALL with cerebral palsy. 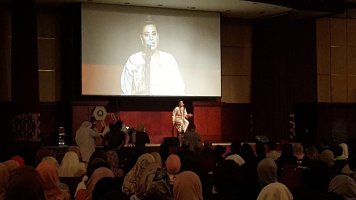 But what really got to me last night during Maysoon’s performance at Ajman University  (an event in partnership with The Arts Center at New York University Abu Dhabi) was the story of her remarkable relationship with her father.

Determined that his youngest daughter would make her way in the world, he set her on a course to change it as well. After learning to walk — by standing on her dad’s feet — Maysoon was off and running. She went on to establish the New York Arab American Comedy Festival and The Muslim Funny Fest. She appears frequently on television, on stage in top New York clubs and on across the US and internationally. She was a headliner on the Arabs Gone Wild Comedy Tour and The Muslims Are Coming Tour, and appeared alongside Adam Sandler in the feature film, “You Don’t Mess with the Zohan.” Watch Maysoon’s TED talk, “I got 99 problems..palsy is just one,” like 9 million other viewers have done, for her whole astonishing trajectory.

Although her hilarious take on her trials and tribulations in Hollywood and the Gaza Strip almost made me pee in my pants, the tales of her beloved dad left me in a rubble of tears. Maysoon’s fierce love and respect for his passionate style of parenting reminded me of my own father’s maverick methods of operating.

For me, last night’s show proved to be a supernatural convergence of my own life stories — DRYLAND and BRAIN IN A JAR — as well as an immersion in the world according to Maysoon. She wants us all to do better with our fellow humans and with our differently abled ones in particular. (Maysoon, you have my word that AU’s stage will be more accommodating ASAP.)

After the show, nearly all 600 in the audience lined up for th

e chance to take a selfie with Maysoon. When my photo op  —  taken with AU’s incredible student ambassadors and our dear Chancellor — was done, I had a fleeting chance to whisper a few words into Maysoon’s ear:

I love you so much that I could just eat you up.