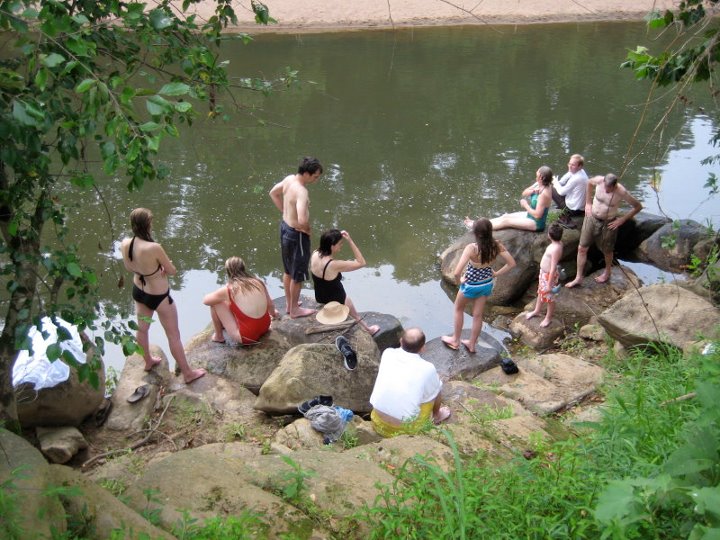 I wish you could follow my train of thought in this upcoming blog post. Instead, you are lost in your own thoughts, or lack thereof, in Juniper Village. I can imagine, and have seen, exactly what your life is like. But even you, a man of great imagination and recalcitrance, would be surprised by the turn of events in my life. I’ve always been a traveler and adventurer like you. Yet, the last 12 weeks have found me in an utter hell.

First off, I came to see you and you didn’t call me gal or Nancy or daughter. I guess you didn’t know who I was. Furthermore, my son David Beauregard was terrified by the other residents at Juniper. They tried to paw at him, and said weird things. David did like seeing you, but he didn’t understand why you couldn’t understand.

While you were forgetting, and we were visiting, your eldest brother Woodson died. (This picture is of Woodson’s children and grandchildren setting his ashes free in the Rivanna River at the old farm. We swam after his funeral at Lyle’s Baptist Church, just the way we did after Nana’s funeral.) One of Woodson’s last statements was “Is this what Berc felt like?”

Berc, your father, lost his mind to Alzheimer’s. You feared it all your life. Your brother Wood feared it at the end of his. Your brother David is dead. Your brother Pete is crazy in the head. I’m not sure whether Bercaw’s or Alzheimer’s is what plagues us. Perhaps it’s both. The former a still unknown malady.

Actually, as I grow older, I realize that Bercaw’s Disease is not unknown. I am afflicated as well as a carrier. Our two main traits are being angry and afraid. A very paralyzing duo. Silenced by rage, fear and history. Quieted by suffering, manners and insecurity. Bolstered by feelings of superiority and aristocracy. Each emotion cancelled out by another, leaving us ineffective.

After I left your company, and Woodson’s services, I went to work in New Orleans where I was met with verbal and emotional abuse on an hourly basis by my new boss. No matter how hard I tried to be good, respectful and gentile, I was brutalized. Why didn’t I stick up for myself?

Dad, I feel like fighting the outside world now, the way you did with the anti-trust suit against Naples Community Hospital. I am going to be vocal about Alzheimer’s and everything else scaring the shit out of us as a family and a country.